By which I mean the beatings my penis took by his overzealous hormone crazed master. I’m not

sure when I discovered that my penis could be used for more than just bathroom activities. If I

had to guess I would say eleven or twelve. I had never felt guilty about playing with myself until

I actually masturbated and sperm came from my dick. The guilt made me swear that I never do

course but I listened to Dr. Ruth Westheimer on the radio religiously also. I can recall this one

sexual act and I just assumed only gay men did that. It would nearly ten years until I could work

up the nerve to ask to do that to a woman. It was worth the wait

I mentioned that my older brother was a drug addict right? At the time my mother refused to

see what her oldest boy really was. But my other brother and I knew what the fuck what was

going on with this nigga. Normally he would come over high and come down eventually around

us. I fucked hated that shit. Being asked the same question a hundred times got old quick.The

stumbling around knocking shit over. I don’t know if he had athlete’s foot or something kind of

nerological disorder but he would scratch at the top of his feet until they bleed. What really put

it over the top for me was the time he came in sober and launched off in the bathroom. I

thought he was bad before this was a whole new ball game. He went off on a tangent about

you hear something so many times you can’t help but get curious. Let’s just say drugs may loosen

some inhibitions you have to screwing the same sex. Again something I could have gone without

knowing my entire self.

My father died in Oct of 88′. My mother offered to pay my way to Tennesse but I told her I had

school to go and could not miss it. I was pretty much done with school at least in my head but I

could not fathom going to a funeral for a man I could hardly remember. I don’t go because he was a

bad man for leaving me before I was eight I just had no feelings for the man. I think my mother

was kind of proud I turned her down. 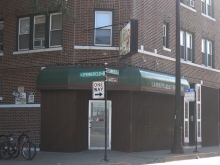 while going to and from the Village Theater. My mother had informed that she and her

boyfriend at the time frequented that place on more than one occasion. I can remember seeing

hookers walk their strip along North ave and thinking how nasty those bitches looked. So when

naked things at one time. As we enter the establishment, we paid the two dollars for

admission and was told that we could not entire the same both. I looked at my work out and

movie buddy as we walked into the dimly light store

“Why the fuck would we do that?” I said

“We are not fags so that was not meant for use”

friend. Holy fuck! do I look at women the way these motherfuckers (although fatherfuckers

into the den of homosexual lust. there were women but of course they were with their

and items that all the perverts were drooling over. The male to female ratio was about 25 to

one easy. Being a kid in the candy store I peered at ever fucking book that looked half

interesting. About a hour or so later I had finished on side of that very long book shelf and had

sucked on by a man’s mouth. I see myself as an evolved human man but gay sex in general

makes me fucking sick. Yeah I said it, two dykes going at it makes a little queasy and two men

impaling each other is just plain nasty. I made it a point to walk quickly but not too quickly to

my side of the long book shelf. As I was walking back I noticed on the top shelf of the book

display there were boxes of male blow up sex dolls. I had no idea that gay men used sex dolls

also. When I got back to my side of the book shelf I moved next to my friend (but not too close)

“What is in those doors?” I asked

to go to the front and buy a roll of quarters. That’s what the machines takes.”

guy in front of one wanting to give or receive a blow or hand job.

“Don’t touch anything. Motherfuckers can be real nasty.” Is what my friend told me as he pulled

his sleeve to cover his hand as he grabbed the handle of the door booth and went in. I followed

his instructions and twisted the knob of the door handle to my booth with shirt covered hand.

The smell of dried sperm hit me in the face like a Tyson punch. it was a good thing I had my

mouth closed. I shut the door behind me and sat on the stool that was provided for the

perverts who dared enter. As I sat down I fully expected to feel cold sperm coat my ass. Lucky

for me another man’s juices had not made contact with the crack of my ass. I reached in with

nailing the shit out of a white chick. He had her doggie style and had his stroke super speed.

Next channel, gay shit. I turned. Next channel. straight white couple on a couch with the blonde

headed female bouncing up and down on her partner’s dick was they both sat on the couch.

hole in the wall. The height of the hole was for men who were slightly taller then and I would

have had to stand on my tip toes to stick my dick in. At the time I knew what the hole was for

but I had no idea it had a actual proper name. The hole was pretty big so if a person wished he

could see what was going on in the next cubicle. While I don’t normally look at men beat their

meat two things struck me about this white guy that had me transfixed. The first one was

rather funny. He had a red garter belt with matching panties and the whole nine. That made

worm and the length of half a middle finger. I was shocked honestly, he was stroking his full

hard on with two fingers. His dick was so small I couldn’t see the opening. I felt guilty for

looking at this freak’s penis and imagined how a man had to go thru life with a worm cock. Who

was he going to please with that thing. The man was literally a living “is it in?” joke. I left that

the a hooker with a cold sore.